JOURNALISM TEACHER OF THE YEAR

​Freedom High School print and broadcast media teacher and adviser Aaron Fitzpatrick has been named the Pennsylvania School Press Association Journalism Teacher of the Year for 2018-2019. Fitzpatrick advises the FHS Press student newspaper, the Shawnee yearbook, and the Bulldog Beat broadcast program. Both the FHS Press and Shawnee have earned numerous regional, state and national awards. 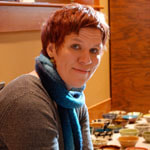 The Pennsylvania School Press Association (PSPA) honors Kate Plows as the 2017 Pennsylvania Journalism Teacher of the Year. Plows, art and journalism teacher and adviser of The Blackfriar Chronicle, and the digital publication, The Friar’s Lantern at Malvern Preparatory School in Malvern, Pa was recognized at the Spring PSPA Conference held at Pennsylvania State University at University Park in March of 2018.

​More than a decade ago, Nate Thompson envisioned a career with insects, trees, and plants. Then he got the newspaper "bug'' while a biology major at Juniata College, and in 2015-16 he was named the Pennsylvania School Press Association's Journalism Teacher of the Year.
Thompson, an English/Journalism teacher at Tussey Mountain High School, Bedford County, for the past 10 years, won the award for his work as adviser to both the high school newspaper and yearbook.

Tara Huber, veteran student publication adviser at Neshaminy High School in Langhorne, PA, has been named Journalism Teacher of the Year for 2014-2015 by the Pennsylvania School Press Association. The Neshaminy High School student newspaper, The Playwickian, has made state and national news by refusing to compromise on its state-protected right to determine its own publications policy, despite the school board and administration calling for acquiescence to their demands. That battle continues in the courts.
She’s also spent the ten plus years teaching English part-time at Today, Inc., a substance abuse program. She holds a Master’s degree in Education from Temple University, and a Bachelor’s degree in Journalism and Communications from Lehigh University.
2013 – 2014 PSPA Journalism Teacher of the Year
​Susan Houseman, Newspaper/Broadcast adviser, Conestoga High School

Susan Houseman is the co-adviser of the award-winning Spoke newspaper and the executive producer of Good Morning ’Stoga at Conestoga High School in Berwyn. This is Susan’s 14th year teaching; prior to becoming an educator, Susan worked as an anchor, reporter and producer at WNEP-TV in Scranton/Wilkes-Barre and WMGM-TV in Atlantic City/Wildwood. Susan is the vice president of the Pennsylvania School Press Association, the state director for the Journalism Education Association and a Dow Jones Newspaper Fund Special Recognition Adviser. She serves on the steering committee of the Student Press Law Center. Susan has a bachelor’s degree in journalism from Penn State, a bachelor’s degree in secondary education from the University of Scranton, a master of education degree from Penn State and a master of journalism degree from Temple University. In addition, Susan is a certified Master Journalism Educator through JEA. She presents regularly at  JEA/NSPA  national conventions.
2012 – 2013 PSPA Journalism Teacher of the Year
​Paul Fantaski, Yearbook adviser, Kiski Area High School

Paul Fantaski is a 1985 Kiski Area High School graduate. He attended Edinboro University to major in Secondary Mathematics Education and minor in music. Immediately after college, Fantaski landed a teaching position at Orchard Hills Christian Academy in Apollo, PA where he taught for 5 years. In 1997, the Kiski Area Administration welcomed him to permanently join the high school mathematics faculty. Mr. Fantaski has enjoyed announcing the Kiski Area Marching Band for 20 years and has advised Kiski’s Campus yearbook staff for 14 years. Under his leadership Campus has earned many awards at both the state and national level. The 2009 book earned a Silver Crown from Columbia Scholastic Press Association. Additionally, the National Scholastic Press Association has continually recognized his books as All-American. On the state level, Campus has won the coveted Keystone All-State Award for three of the past four years. Balfour Publishing has recognized Campus in their Yearbook Yearbook for ten years. In September, Adobe Inc. chose a spread from the 2012 Campus as one of the top five best designed spreads in the country. Beyond the district boundaries, Paul has taught yearbook-related skills in various workshops held in Pennsylvania, West Virginia, and Texas. He also has adjudicated yearbooks for PSPA and for other states across the nation.
Pennsylvania School Press Association     Copyright © 2019-2020     www.paschoolpress.org